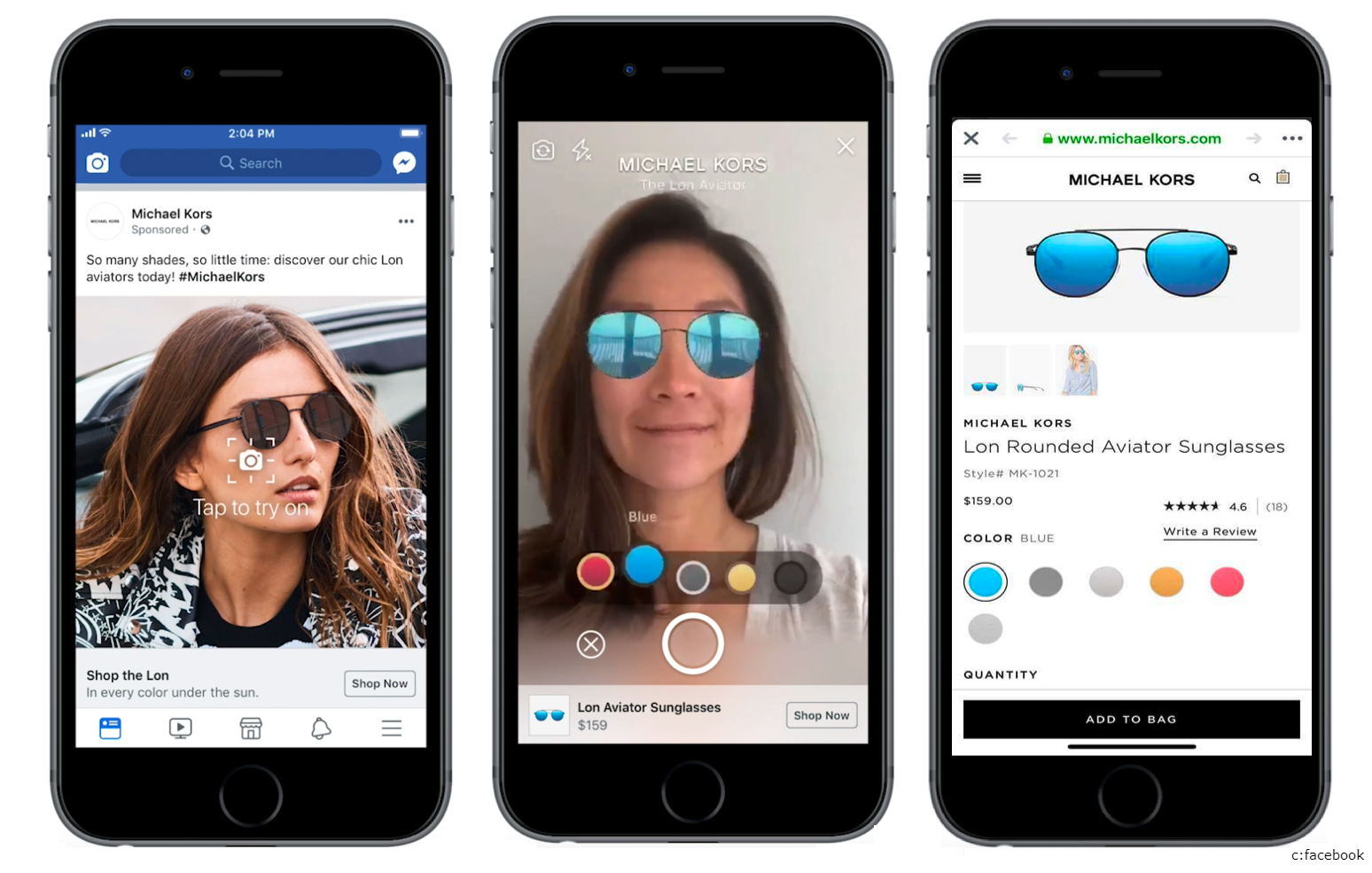 By Mark Jones | 12th July 2018 | MarketingTech https://www.marketingtechnews.net/
Categories: Advertising Technology, Branding, S-Commerce, Social Media Marketing,
Mark manages all aspects of editorial on MarketingTech as Editor, including reporting on the fast-paced world of digital marketing and curating the site’s network of expert industry contributions. Originally from Plymouth, Mark studied in Reading and London, eventually earning his Master's in Digital Journalism, and most previously covered goings-on in the idiosyncratic world of performance marketing for PerformanceIN.

With a limited supply of inventory available to advertisers in its news feed, Facebook seems to be trying out slightly more novel ways of ensuring brands are getting the best bang for their buck.

Limited to its US users at launch, a new augmented reality (AR) feature will enable customers to virtually try on items “in just one click” from certain ads, including fashion accessories and cosmetics, as well as trying out AR-based games and apps.

The social network says the new update comes off Boston Consulting Group findings that 80 million people in the US engage with AR on a “monthly basis”, which that figure expected to grow to more than 120 million by 2021.

“From try-on product experiences to immersive filters for games and movies, AR enables people to connect with your business and products in new ways,” the company explained in a blog post.

“Now, with the introduction of AR ads in Facebook News Feed, people can experiment with your brand’s AR camera effects in just one click from your ad. And by incorporating calls-to-action within the camera experience, people can seamlessly go from engaging with your product—such as trying on a lipstick shade or exploring a new game—to making a purchase or installing an app.”

It’s not the first time the ad tech aggressor has dabbled with the concept of AR, having launched a similar ad product within its Messenger app and Instagram app encouraging users to share their creations in Snap-esque style. However, featuring these in the news feed will see them in a much more frontal and mainstream position.

Facebook says luxury fashion retailer Michael Kors was the first brand to try out the new iteration of the ads enabling potential customers to try on a pair of sunglasses from an extensive range of styles and lens colours.

Later in the year, additional advertisers in the offing to join include Sephora, NYX Professional Makeup, Bobbi Brown, Pottery Barn, Wayfair and King, as well as others spanning fashion accessories, cosmetics, furniture, gaming and entertainment.

Alongside the announcement, Facebook also released a mobile Video Creation Kit, enabling advertisers to fire out simple video ads for mobile with existing images, overlays and logos, based on its research that eight of 10 (79%) of consumers would rather watch video than read text on a page.

A final announcement meanwhile came with the continued expansion of Shopping for Instagram stories which, having made available to a select few brands, it says is now available to all brands that have shopping on Instagram during the holiday season.